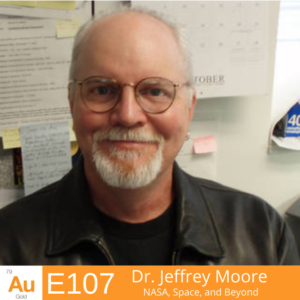 Dr. Jeffrey M. Moore is a Research Scientist at NASA Ames Research Center. Dr. Moore is Imaging Team Lead for NASA’s New Horizons Mission to the Jupiter system, the Pluto system, and the Kuiper Belt, which flew past the Pluto system on 14 July 2015, and provided our first view of the geology of Pluto and Charon and more recently, flew past its second major science target—Arrokoth, the most distant object ever explored up close. In addition to the New Horizons Mission, Dr. Moore provides leadership and participation on other NASA Planetary Mission Science Teams including, Co-Investigator for the Europa Clipper Mission ground penetrating radar instrument, REASON, Collaborator on the HiRISE camera aboard Mars Reconnaissance Orbiter, and previously, Dr. Moore was a Long Term Planning Lead in mission operations for the Mars Exploration Rover (MER).  Dr. Moore’s research focuses on a range of topics relating to the geologic evolution of planetary landscapes and crustal materials.  He has published a number of papers on the geomorphology, stratigraphy, and sedimentology of, as well as explored the roles of impact cratering, volcanology, and tectonism on terrestrial planets and outer planet satellites.  He has conducted extensive laboratory simulations of Martian geologic processes, including his dissertation laboratory experiment on the sublimation of ice beneath lags of dust and sand under Mars-like conditions. Dr. Moore has led multiple Mars-related NASA-funded investigations including, the geomorphic and sedimentological evolution of ancient Martian highlands and basins, and a laboratory investigation into the formation of evaporites and brines under Mars-like conditions.  In addition, he has headed an investigation into the nature of erosion of the moons of Jupiter, and has conducted research on the implications of impact craters on Europa for a sub-surface ocean, and surface volatile migration and landform degradation on the icy Galilean Satellites as part of his 15-year-long association with the Galileo SSI (imaging) Team. Dr. Moore was awarded of the 2018 G.K. Gilbert Award for his outstanding contributions to the field of Planetary Geology and was recently awarded the ‘NASA Exceptional Scientific Achievement Medal.’ His is also a Geological Society of America Fellow.